«Some Ditty, a Mountain III» is the third incarnation of an idea that found its form in 2010 as a 32-minute piece for voice, guitar and drums as «Some Ditty, a Mountain II». As Combineharvester, guitarist and singer Marlon McNeill and drummer Kevin Shea combine drone, noise and kraut elements into a huge and multi-layered wall of sound: sensual, epic, overwhelming and conciliatory at the same time. «Everything pushes forward. The voluminous bass drum bounces. The strings follow obediently and elves struggle through» writes freiStil – the Austrian magazine …for Musik und Umgebung.

The idea of interpreting the drone-like piece with more than just two musicians has been dormant for quite some time. The project explores whether the sensual quality and spatial effect of the drone music created by the use of delay and reverb effects, which were used extensively in the first version of the piece, can be produced similarly without artificial effects and only with the number of instruments used and the micro shifts that occur during playing.

With the support of KlangBasel the time has come to pursue this question, to transfer «Some Ditty, a Mountain II» into a collective with a selection of the most interesting musicians from the contemporary underground scene and to put it on stage as «Some Ditty, a Mountain III». Marlon McNeill and Miro Widmer, who in the meantime has taken a permanent seat behind the drums at Combineharvester, invite a selection of their favourite drummers, guitarists and singers to perform this intuition-driven piece. With the support of light designer Anna Dippert, a space and time free space will be created on an auditory and visual level, which, based on the quote of fanzine Rokko’s Adventures, will leave the listeners «floating exactly a few centimetres above the ground».

This concert is supported by Fondation SUISA 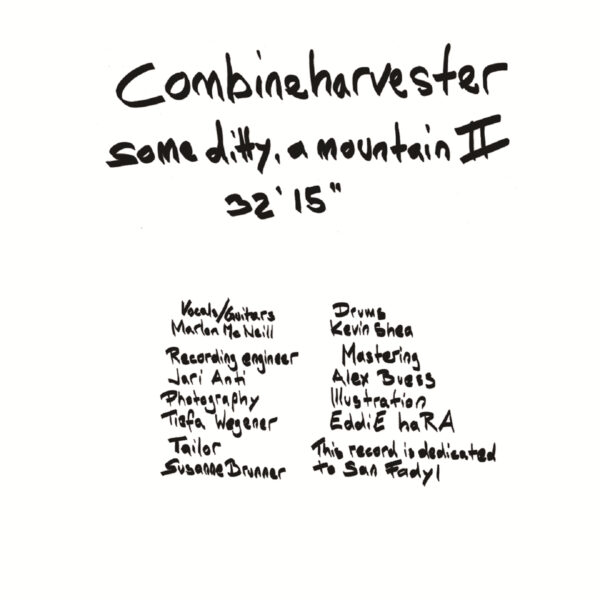 Combineharvester – Some Ditty, a Mountain II